Every month Netflix adds a daunting list of movies, television shows, and original content to its ever-expanding catalog of binge-worthy entertainment. For many, this can spell disaster. With so many new options it can be difficult to navigate the sea of possibilities at one’s fingertips at any given moment. Nobody wants to spend their entire weekend bingeing a show they desperately want to chat about with work friends only to find that the conversation around the water cooler on Monday is one of a show they’ve never even heard of. Not to worry. Considering my job involves writing about things new to and coming soon to Netflix, it seems fitting that I spend an alarming amount of time watching it. I sift through the unwatchable muck to find those gems of immersive entertainment bliss we all love so you don’t have to, and I do it with care. Here is a series, a movie and a stand up comedy special new to Netflix this month (along with some honorable mentions).

Up first, for those Sci-fi lovers out there, a new Netflix original called Altered Carbon. In a dystopian 26th century San Francisco, death has been postponed. Through the use of replacement bodies or “sleeves” a person that has become too old or ill to continue living, or someone whose body has already died can have their consciousness transferred into a newer, healthier sleeve using a shimmering blue device with all their thoughts and memories loaded onto it, called a “stack”. Immortality, in a sense (for those who can afford it). However, what may at first sound like an amazing new world with endless possibilities quickly turns dark and reveals to viewers some of the more negative aspects of achieving the potential to live forever. While the super wealthy can afford to transfer stacks whenever they please and can choose any sleeve they want, the poor are left to deal with whatever is left over. This means that a lost loved one may come back to life a different age, ethnicity or even gender than when they passed away.

This series follows Takeshi Kovacs, an “envoy” or special military soldier, hundreds of years old, with extreme fighting capabilities. His skills increased even more when he joined an uprising against the protectorate that wanted to make sure that the future of immortality did not lie in the hands of the super-rich alone. Now the last remaining envoy, one of the super-rich, Laurens Bancroft, has hired him to solve a murder. Bancroft’s own murder, to be specific. However, while Bancroft is elated to have the help of Takeshi, a detective on the ground is not so happy to have a trained killing machine walking her streets. Especially one that happens to be using the body of her lost partner and lover. The series is also punctuated with moments of understated humor such as his AI hotel manager, Poe (Modeled after Edgar Allan) as well as overstated nudity the likes of which have not before been seen in a Netflix original series. Follow Takeshi as he fights off bad guys, navigates the hard-to-read landscape of being tracked by a conflicted police officer and tries to figure out the truth behind a deceptively elusive murder and its perpetrator in Altered Carbon. Streaming now!

With an ensemble cast made up of George Clooney, Brad Pitt, Matt Damon and Julia Roberts (just to name a few), it’s no surprise that the Ocean’s trilogy made it onto this What to Watch list. If you like heist movies with a modern twist, these three films are all in the category of “Must Watch.” Ocean’s Eleven follows Danny Ocean (Clooney) and his eleven associates as they concoct and haphazardly execute three Las Vegas casino robberies at the same time. Impossible, right? Right. But luckily, this is a movie. One that seamlessly takes each and every skepticism and plot hole the viewer may have as they watch it and answers them quickly and efficiently, with the poise of a master figure skater gliding across a freshly smoothed rink (something we have come to expect from director Steven Soderbergh). Sure, not all of it’s explanations are entirely believable or even physically possible, but the movie itself engulfs one’s sensibilities and renders them helpless, floating in an ever-entertaining vat of suspended disbelief (what I imagine it must be like to actually meet George Clooney). For that alone, it (and the sequels) are worth the watch. 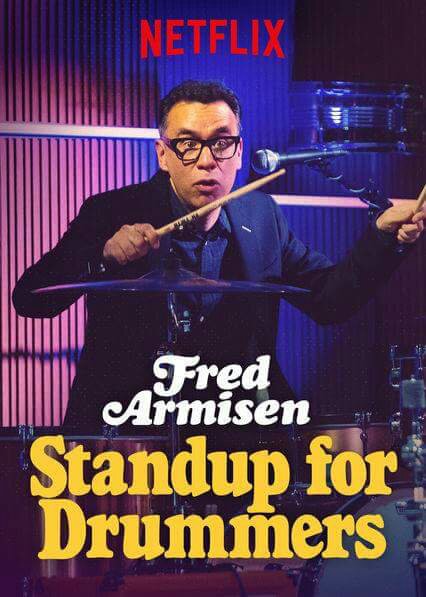 This standup comedy special is exactly what it sounds like. Fred Armisen, widely known for his roles in Saturday Night Live and Portlandia, used to be a professional drummer in indie bands before eventually making the switch to comedy. Now, in his first-ever hour-long standup special for Netflix, he takes the time to do a large amount of material targeted specifically at drummers and people who have spent a lot of time around them. Never picked up a set of sticks and beat some skins like they stole your lunch money? No problem. While this special is primarily aimed at those with drumming in their blood, you don’t have to be a drummer to appreciate Armisen’s humor. If you are at all familiar with his work in Saturday Night Live and Portlandia, you’ll feel right at home watching Standup for Drummers. His raw comedic talent is something that translates to any medium and is instantly relatable to most people, whether or not they’re musically inclined. With off-the-wall impressions and characters, along with his dry, witty observations, this special is sure to split sides in every demographic.

There you have it! Listed above are just a few notable additions to the over 75 total shows, movies, and specials that have or will soon be added to the Netflix roster in February of 2018. While I, unfortunately, do not have time to list and review each new addition to Netflix, I think that the titles listed in this piece are ones to look out for. Here are a few titles I either haven’t watched yet or are yet to be released, but that I am particularly excited about. Keep your eyes peeled for:

Kavin Jay: Everybody Calm Down (Feb. 2)