This is part 2, you can find part one of My first Evo Adventure here

The next morning brought a continental breakfast of instant oatmeal and dry cheese Danishes. It was not great, but it was free, and in Vegas that’s like winning the unicorn lottery. We packed our things and checked out of Travelodge, we wouldn’t be coming back.

On the way to the Grand Finals people with signs were outside the entrance hoping to buy tickets. I felt for them, stuck in Vegas, right outside finals, with the south hall closed and no place to go. But pity was all I could give them, we had no tickets to spare. They would have to watch finals online. That part wasn’t cool. The inside of the stadium was though. 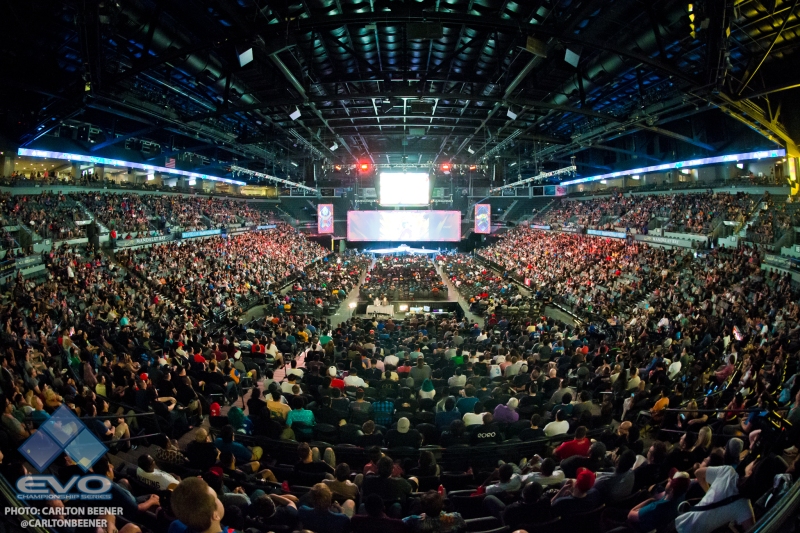 Amazing photo of the stadium by Carlton Beener

Mandalay Bay auditorium was surreal. Even with everyone as sleep deprived as we were, the energy was palpable. We arrived right as they were announcing the results for Guilty Gear Rev 2 (GGR2). We saw a stage full of Japanese players, and one Lost Soul representing USA. I watched the stream of the matches later, and even knowing the results, it was exciting and humbling. GGR2’s game engine is deeper than most fighting games. Roman cancels (RC’s) enable more freedom in combos, and the Burst gauge balances that freedom defensively, making high level play a multilayered science. I probably wouldn’t have appreciated it as much were it not for Majin Obama shouting himself hoarse, all while explaining character match ups and mechanics on the fly. He did a great job casting, and if you didn’t see the GGR2 top 8, you can watch them here. Congratulations Omito! And an amazing job by Lost Soul representing USA.

The Super Smash Brothers Melee (SSBM) finals were intense. Adam was our expert, he used to be a competitor and tournament organizer for SSBM, so he had personal interest and experience. I played casually back in the day, but was rooting for Leffen as a fellow DBFZ player and challenger to the greats. Alan was a longtime Hungrybox fan, (inspired him to become a puff player himself.) And Jayden was just looking for an excuse to yell. He got plenty of opportunities, the matches were back and forth throughout SSBM’s top 8. The only exception to the rule was Leffen, who was a godslayer through his entire run, beating the legends of smash before donating a portion of his winnings to the 5th/7th place finishers.I was proud to be a Leffen fan, and happy to see Adam convert after the tournament. Smash has a new, beneficent god. Congratulations Leffen, watch his victory here.

The Tekken finals were LOUD. Everytime Tasty Steveyelled “BREAK HIS LEGS” the crowd roared. Carey was our Tekken/Street Fighter expert, and explained how Rangchu and Lil Majin were breaking the meta with their picks and play. I was rooting for Ranchuand his amazing underdog, (or underpanda, more accurately.) Jayden was rooting for Lil Majin long before that, (well, he was yelling KING until I told him the player’s name.) Tekken’s variety was exciting, seeing “low tier” characters in the top 8, and one played by an American, made for an intense finals. Unfortunately I missed the Negan announcement because Alan and I were panicking trying to find Jayden, who had decided to go on a Rugrats style adventure. But I heard the Negan shock roar from outside the stadium. Thankfully, we found Jayden, you can find the Tekken 7 finals here.

While I loved every grand final, the Dragonball Fighterz finals was what I came for. Though I was never a fan of the character, Cell’s first intro yellwas the most hype moment of EVO. Every time a match started the stadium shook with Cell yells. As an NRG/SFShock fan I was rooting for Supernoon, but I was a big fan of everyone in top 8 as players. Jayden was screaming for SonicFox whenever he was onstage. Though I hadn’t seen much of KnowKami before EVO, his matches made us fans. The way Kami broke crossup protection on perfect attack showed why he deserved to be on that stage. But all three top 8 Americans were impressive. None moreso than SonicFox, who’s calculated defeat of the legendary Goichi Kishidais now EVO history. Goichi summoning the eternal dragon multiple times made for a ridiculously epic grand finals. After the event people gave SonicFox a hard time about asking for a seat swap, but facts are that’s a legal request. IMO it was strategic but it wasn’t cheating, so that controversy is overblown. That was DBFZ’s first EVO finals, and EVO’s highest watched game ever on twitch.History was made, and I was lucky to see it in person, if you haven’t yet, watch it here.

As soon as the announcements for DBFZ were over, the SoCal squad had to leave. The Cooler hype was a great note to end on though. I followed Adam, Carey, Alan, Kat, and Jayden back to the car where we said our goodbyes and I got my stuff. I still had the Sacramento scene to hang out with, so I headed back to the stadium. Unfortunately, they wouldn’t let me back into the venue with my bags, and I had no room to put them in, so I was stuck outside while the rest of the Sacramento scene watched the Street Fighter finals. I suddenly had a lot in common with the people holding signs earlier. The Street Fighter finals were lit though, Problem X brought home a huge upset for London. Check it out here. I couldn’t watch it, cause I was stuck outside, but there was a silver lining…

So there I was, trapped outside of EVO grand finals by myself. Just another starving college student with very little money. So I got on Twitter and tried to see if I could find some games while I was waiting. But we PC players don’t have as many connections through netplay. Only one online training buddy actually responded, someone who I had played with on his stream, EVO top 17 DBFZ finisher, Zombmu aka Jeff. Out of the kindness of his heart, Jeff let me ride into Anime suite on his coattails.

For those not in the Anime Illuminati, Anime suite is theplace where the best players party and grind casuals after EVO. I got a BlazBlue Tag tutorial from Mannyfresh,I got bodied in DBFZ by the incredible Japanese top player Toki, as well as many others during a “cultural exchange”. American players lined up on one side, Japanese players on the other, and we would take turns playing against people who lived on the other side of the world. Corimon knew enough conversational Japanese to get us by, and was also super fun to talk tech with between matches. I got a Guilty Gear tutorial from the absolutely hilarious Beautiful Dude. Oh, yea, and Hookganggod asked me for next, and later smashed some face with Sol Badguy. That was kinda bizarre to see a famous DBFZ player show off Guilty Gear skills, but it was also pretty awesome. I got to play and hang out with the best players in the world, but it felt just like my Sacramento weeklies. (Which you can watch me cast here.) As a relatively new player who didn’t make it out of pools, it was pretty humbling and exciting to be there. But it also made me realize that no matter your skill level, respect is top tier, and the grind never stops. Anybody can be top level, they just have to put in a top level of work. 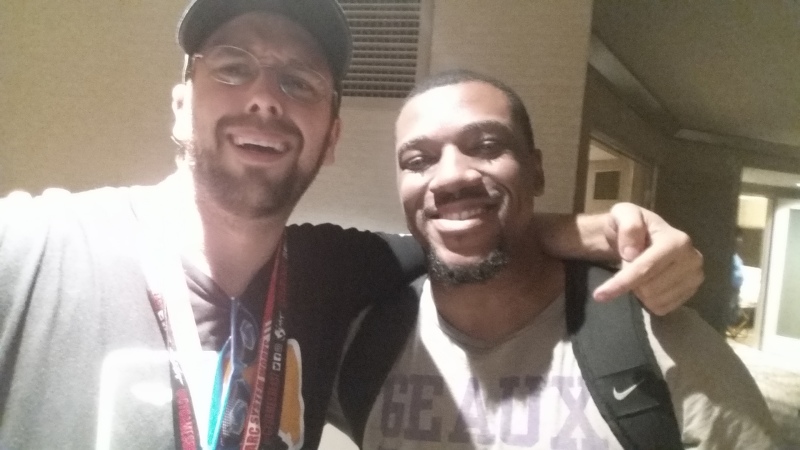 Turns out it was KnowKami’s first EVO, didn’t stop him from getting TOP 8!

I stayed at the suite the whole night, and hardly even slept. I talked to all my favorite players, and learned about them as people. (KnowKami has the most inspiring backstory, the feels.) I got to know Emily, whose tag I couldn’t pronounce but was an amazing individual who got me even more hyped for Soul Calibur 6. (Which I didn’t think was possible.) I helped her clean up the suite and got perhaps an hour of sleep before I panic checked in for my flight. I had been so distracted by the grand finals and the star studded anime suite that I had completely forgotten to check in. Thankfully, I did it just in time. 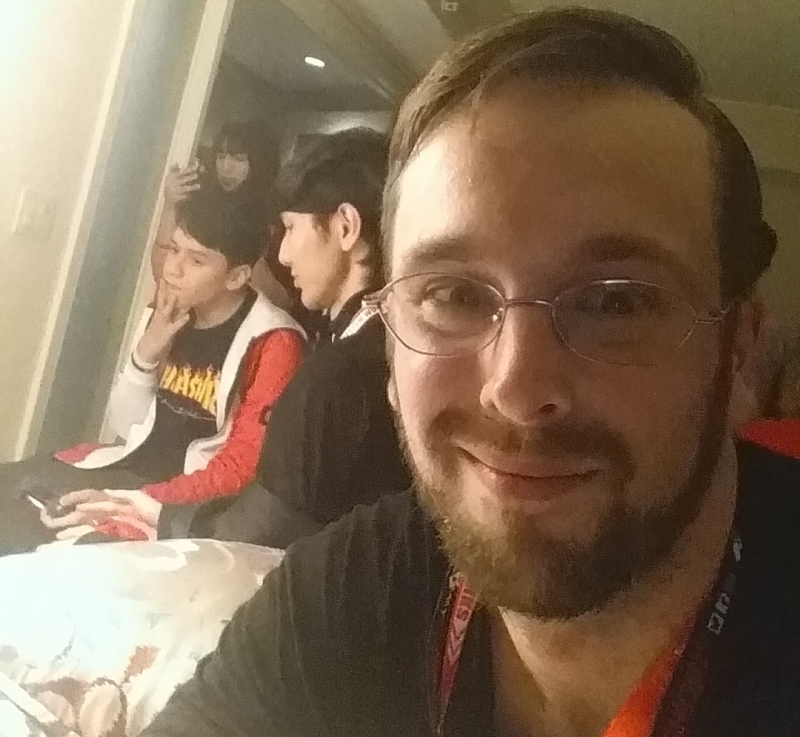 I flew back to Sacramento, through clouds of smoke in a sleepy haze. My first Evo was over, but you never forget the first. I can’t wait for next year, where I WILL make it out of pools, time to level up.

Until next time, GG